What More is There to Say about ‘Squid Game’ ?

Twisting what seems to be obvious setups and frameworks is what sets the story structure of Squid Game apart. I appreciate that this narrative is complex but not complicated; an easy enough plot to wrap your head around while still treating the audience like an equal participant in this social commentary

The series that took the world over has become Netflix’s most successful hit; but this compelling drama proves that series with different perspectives and many layers will thrive, and Asian cinema will continue to shine regardless of validation from Western audiences.

The subject matter of Squid Game contains sexuality and violence, as will be discussed below. This article contains spoilers.

There is absolutely no question that ‘Squid Game’ is a cultural reset, taking the familiar storyline of a deadly game to new heights. But what sets Squid Game apart from these thrillers, or any Netflix original series? Aside from its top-notch storytelling and characters- I want to delve into these stand-out attributes that elevate this already intriguing narrative.

Obviously, this series is masterfully executed (no pun intended), down to every last detail. With large-scale sets built on lots for the actors to get lost in, The visual components of Squid Game did a lot of heavy-lifting as emotional conveyors throughout the episodes.

When you think about life or death situations in the form of a game, your mind may take you to visual cues such as these:

Dark, dampening colours obscuring the protagonist- to keep them hidden amongst the danger. Shrouded by scattered elements of nature, over which they have no control. Surroundings just as unpredictable as their opponents.

The controlled setting of the arenas allow so much space for reimagining these conventions.

The fan-favourite set, and the first glimpse as to how intricate and larger than life these ‘games’ may be- are the winding, colourful maze staircases. Here, and continuously throughout the series, we see the use of bright colour and symmetry amidst quite a bit of chaos. 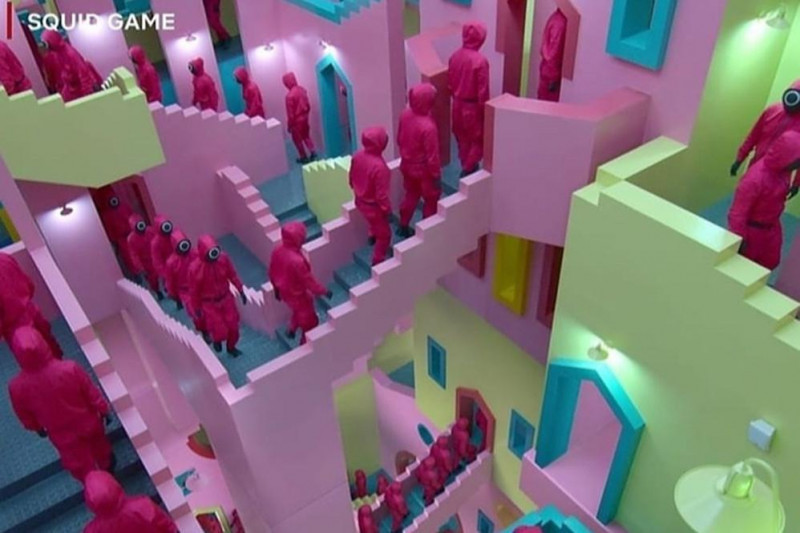 The idea of dark themes juxtaposed with a bright palette is reminiscent of horror favourites such as ‘Midsommer’, both works take advantage of the stimulating reaction caused by fluorescent colours and use it to heighten the experience of fear and anticipation, as opposed to using dark neutrals to hide from the unknown. Squid Game also cleverly integrates the use of controlled lines, symmetry, and rhythmic movement to soothe the anxiety of an overwhelming setting. These two powerful visual forces meet in the middle to place you right in the sweet spot of intrigue and dread. Simplistic elements both highlight and contrast the complexity of the human condition- an example being how the players might manipulate and kill for a clue as to what the next game might be- when they were clearly illustrated on the wall the whole time.

Twisting what seems to be obvious setups and frameworks is what sets the story structure of Squid Game apart. I appreciate that this narrative is complex but not complicated; an easy enough plot to wrap your head around while still treating the audience like an equal participant in this social commentary. Every component, technical and story-wise, is well thought-out and deliberate.

Clever unveilings as the characters develop reinforce the idea that not only can your fellow player not be trusted, but the Games as a whole may not be as rule-driven as they appear. Each and every player is a wild card from the beginning, this is something that the main cast of characters, as well as audience members can all agree to be true. But when the foundation of the Games begins to crack and crumble, is when the real fun begins, and where real lessons can be learned.

One of the most impactful shifts in dynamic amongst the characters takes place at the end of the marbles game. We are previously given to understand that there are distinct camps- the bad guys led by Jang Deok-su, and the good guys who are different than the other players and genuinely want to help each other succeed as long as they can. At this point in the series, we have accepted that Jang Deok-su is the antagonist. The Big Bad that will haunt the good guys throughout the remainder of the games, and this is not untrue. However, it is during the heartbreaking betrayal of Ali, that the flames of Cho Sang-woo’s ruthless, cowardly and sociopathic tendencies are stoked, and suddenly the reserved and protective leader we have come to trust is beginning to turn.

So, playing fair amongst the contestants is established as being off the table, which is hard to watch because in the depths of our souls, we want to believe that truth and merit will get us all to the finish line in the end. But regardless of an honest game that may- or may not- be completed by the players, the Powers that Be will always find a way to pull the rug out from under you regardless of what the rules are. Why? Because they can.

Do you see where I’m going with this?

When players begin to use skill to defy the odds of making it through the glass-panel game alive, the conditions of the game are intentionally altered to disadvantage them further. The introduction of the rich gamblers influences the conditions of the game for their own entertainment, where individual talent is deliberately squashed in favour of a more exciting experience.

Finally, the reveal that Oh Il-nam was the orchestrator of the games is a gut-wrenching discovery that contradicts everything Squid Game initially stood for: equality. A level playing field regardless of status or privilege. This unifying idea renders what would have otherwise been Cruel Overlords of Torture down to a very human ideology. The unraveling of this principle signifies that, through an anti-establishment lens, not only can we not trust our companions- but the institutions that we rely on to run a certain way. They too, are at the whim of their own best interests. Oh Il-nam acting as a key player- with different protections, different stakes, and different motivations all openly defy the most compelling aspect of the games, and the only facet of righteousness amongst all of this heinousness.

Squid Game overflows with action, emotional highs and lows, excitement and spectacle. But what is it that enamours so many audience members enough to make Squid Game the overwhelming success that it is? I believe it is a sense of longing to have agency over the impossible situation you see before you. Along the lines of ‘What Would You Do?’, in addition to the show’s creators projecting their ideas of human condition onto you, your own morality, your individual threshold for pain or empathy, factors into your watching experience- making every viewer’s interaction with the show unique. It also begs the question, how complicit are we in feeding into these systems in our own lives? The unfairness and devastation that we feel leaves us with a long-lasting critical lens after the finale is over.

Due to it's lack of representation outside of outstanding Asian creators, and some extremely strong female leads- I have given this series as a whole an Incluvie score of 3.5, and an overall score of 4.5.

Previous Reading
Happy Halloween, Scooby Doo!: An Original Movie
Next Reading
Have a Good Trip: Netflix Takes You on an Adventure Into the Reality of Psychedelics